What is Cubital Tunnel Syndrome?

Cubital tunnel syndrome is a condition brought on by increased pressure on the ulnar nerve at the elbow. There is a bump of bone on the inner portion of the elbow (medial epicondyle) under which the ulnar nerve passes. This site is commonly called the “funny bone” . At this site, the ulnar nerve lies directly next to the bone and is susceptible to pressure. When the pressure on the nerve becomes great enough to disturb the way the nerve works, then numbness, tingling, and pain may be felt in the elbow, forearm, hand, and/or fingers.

Cubital tunnel syndrome symptoms usually include pain, numbness, and/or tingling. The numbness or tingling most often occurs in the ring and little fingers. The symptoms are usually felt when there is pressure on the nerve, such as sitting with the elbow on an arm rest, or with repetitive elbow bending and straightening. Often symptoms will be felt when the elbow is held in a bent position for a period of time, such as when holding the phone, or while sleeping. Some patients may notice weakness while pinching, occasional clumsiness, and/or a tendency to drop things. In severe cases, sensation may be lost and the muscles in the hand may lose bulk and strength.

Dr. Dehghan will assess the pattern and distribution of your symptoms, and examine for muscle weakness, irritability of the nerve to tapping and/or bending of the elbow, and changes in sensation. Other medical conditions may need to be evaluated such as thyroid disease or diabetes. A test called electromyography (EMG) and/or nerve conduction study (NCS) may be done to confirm the diagnosis of cubital tunnel syndrome and stage its severity. This test also checks for other possible nerve problems, such as a pinched nerve in the neck, which may cause similar symptoms.

When symptoms are severe or do not improve, surgery may be needed to relieve the pressure on the nerve. Dr. Dehghan may recommend shifting the nerve to the front of the elbow, which relieves pressure and tension on the nerve. The nerve may be placed under a layer of fat, under the muscle, or within the muscle. Or he might recommend trimming the bony bump (medial epicondyle). Following surgery, the recovery will depend on the type of surgery that was performed. Restrictions on lifting and/or elbow movement may be recommended. Therapy may be necessary. The numbness and tingling may improve quickly or slowly, and it may take several months for the strength in the hand and wrist to improve. Cubital tunnel symptoms may not completely resolve after surgery, especially in severe cases. 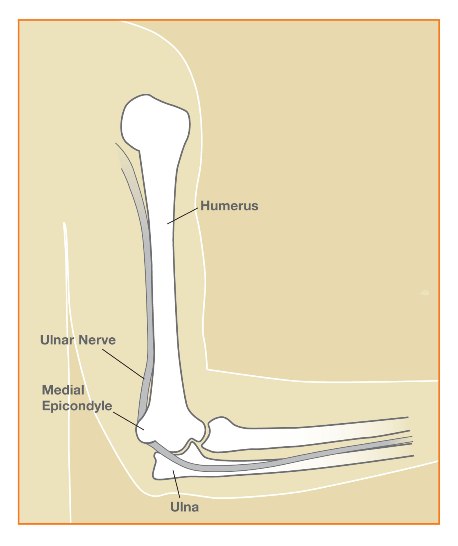